With contrasting styles going to war against each other inside the octagon, it is often extremely challenging to accurately predict an outcome in the UFC.

One of the many ways we can enhance our ability to evaluate and predict fights is by understanding the drastic changes in expected outcomes in different weight classes.

Data sourced from the UFC Performance Institute indicates exactly what we had already suspected: there’s a noticeable difference in average bout duration and finishing percentages in different weight classes in the UFC.

Today, we will review all of the relevant data that we have sourced from the UFC Performance Institute so that we can improve our UFC betting decisions.

Like boxing, the UFC schedules fights under weight classes.

These weight classes exist to ensure that matchups are relatively safe and fair by matching fighters who are of a similar weight.

It wasn’t always this way.

The first UFC event was an eight-man tournament with no weight classes or judges.

It’s now increasingly rare to see open-weight martial arts contests in the United States. But it was this style of competition that got everyone hooked on the UFC in the first place.

Despite giving up a noticeable size and weight advantage to Ken Shamrock and Gerard Gordeau, the 180-pound Royce Gracie neutralized and submitted his bigger and stronger opponents by using Brazilian Jiu-Jitsu techniques.

After 25 years of the UFC, there are nine weight classes available to fighters in the world’s leading mixed martial arts promotion.

Eight of these weight classes are available to men, and four are open to women.

Men can compete in every weight class except for strawweight.

Women’s divisions have now been established for strawweight, flyweight, bantamweight, and featherweight.

Since we’re interested in betting on the outcomes of a UFC bout, it’s essential to understand the differences in expected outcomes between these weight classes. 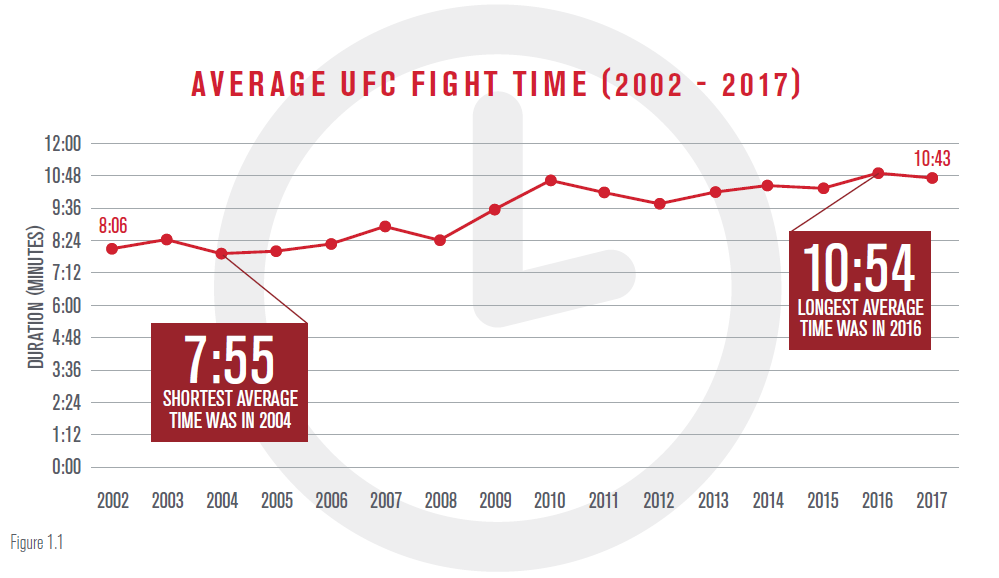 You might be surprised to discover that the average duration of a UFC bout has increased over time.

We can only speculate on the influencing factors, but it’s fair to assume that the rapidly increasing skill level of athletes in the UFC has improved not only their offensive capabilities but also their defensive skills as well.

For example, it’s now uncommon to see a relatively one-dimensional martial artist competing in the UFC. Some of the most talented strikers are now capable of defending takedowns and submissions if the fight goes to the ground – something that cannot be said about many of the athletes who were competing many years ago. 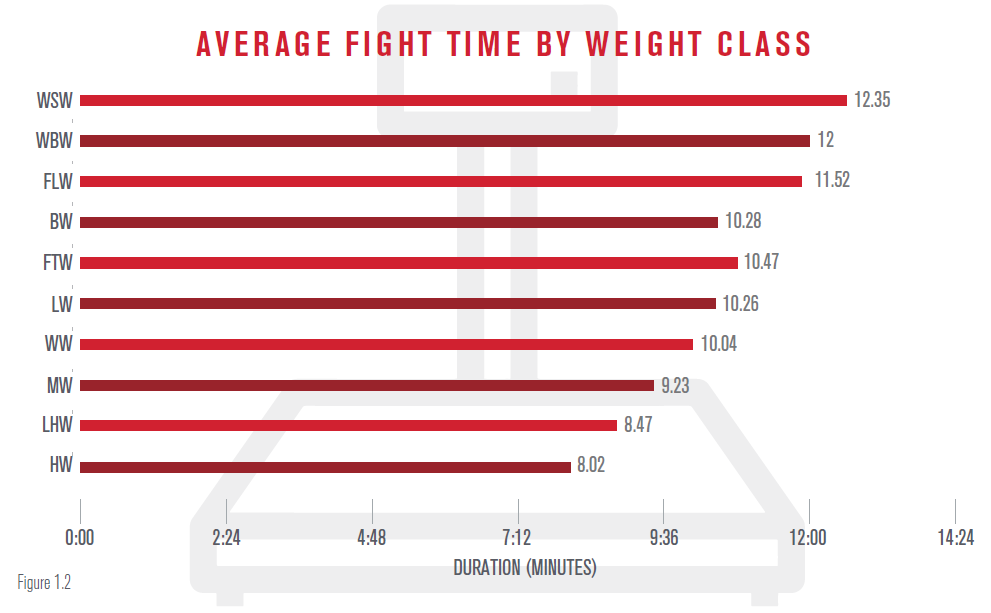 While it’s not unexpected that heavyweight fights last shorter on average than women’s strawweight fights, the almost linear relationship between fight duration and weight is remarkable.

The data provided by the UFC Performance Institute shows that there is a linear increment in average bout duration of 30.3 seconds per weight class from heavyweight to strawweight – with the exclusion of the UFC men’s bantamweight division which stands out as an anomaly.

At a difference of 4 minutes and 33 seconds, the disparity in average bout duration of a heavyweight contest and a women’s strawweight contest almost equals the length of an entire UFC round.

If we’re only considering the men’s divisions, the gap between the flyweight and heavyweight division is 3 minutes and 50 seconds.

It’s important to understand and manage these expectations when betting on mixed martial arts. 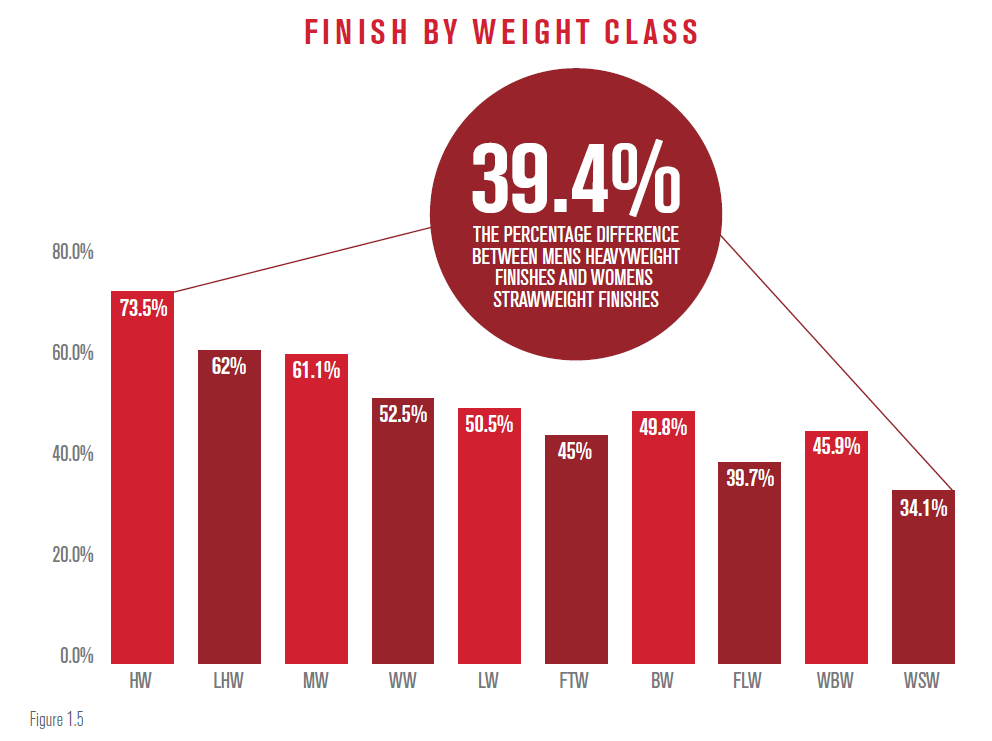 As the weight class gets heavier, so does the likelihood that the fight will finish before making it to the scorecards.

The heaviest weight class – the UFC’s 265-pound heavyweight division – sees more finishes than any other in the UFC. At the other end of the spectrum, the 115-pound women’s strawweight division is the most likely to make it to the judges’ decision.

This data can almost entirely be explained by familiar physics formulas.

With power equal to force multiplied by velocity, and force equal to mass multiplied by acceleration, it’s clear that the size and weight of a fighter plays a significant role in the generation of power.

Of course, there’s more to a knockout than power alone. Timing, speed and accuracy matter as well.

But it’s absolutely clear that a 265-pound body can generate more forceful strikes than a fighter who is competing in the 125-pound division.

Obviously, one of Francis Ngannou’s punches is far more likely to achieve a KO/TKO finish than a punch from someone competing in the women’s strawweight division.

Because of this increased impact, there is a 39.4 percentage difference between men’s heavyweight and women’s strawweight finishes. 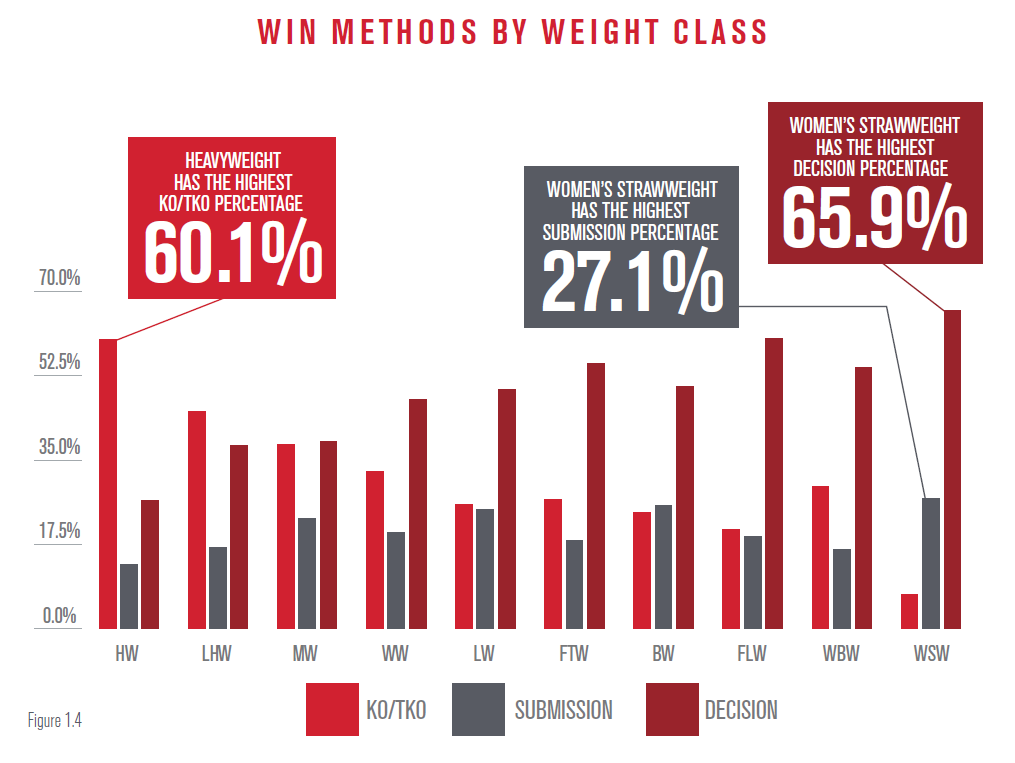 To further understand finishing rates in the UFC, it’s important to evaluate the differences in the method of victory in every weight class.

More heavyweight fights are finished inside the distance than those of smaller weight classes, and this difference is mostly attributable to improved KO/TKO rates in heavier weight divisions.

The 60.1% KO/TKO finishing rate in the 265-pound heavyweight division is significantly higher than the 20.5% of male 125-pound flyweight fights that are finished by KO/TKO.

The final point to consider is the data shown in the table above.

While there is no observable relationship between weight classes and KO/TKO finishing rates for stoppages by knees, elbows, or kicks, there is a noticeable incremental advancement in finishing rate by punches as the weight increases.

Interestingly, almost 50% of finishes in the female strawweight division are via rear-naked choke.

Size plays a significant role in the outcome of a mixed martial arts contest.

It’s important for MMA bettors to consider the increased likelihood of KO/TKO stoppages when betting on fight duration markets and method of victory markets.

Khabib Nurmagomedov: “McGregor Doesn’t Deserve a Rematch”
Khabib Nurmagomedov is often pretty harsh. Not only in the ring, but also during his press conferences, which we saw earlier today in London. Although ...

Cris Cyborg Accuses Dana White and Joe Rogan of Bullying
Cris Cyborg decided to speak up and rip Dana White, claiming that UFC's president bullies her for quite some time. In her address to ...
Share1
Tweet
Share
1 Shares